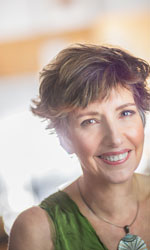 Anne grew up in a little Pennsylvania town along the Susquehanna River, in a house with a grave-yard on one side and a cow pasture on the other. She first took the stage in at age 7, as a singing cow in her school Christmas pageant. During that debut she tripped over the boy playing the donkey and toppled the Holy Family. A future on the stage seemed unlikely. But, a few years later, she cracked a joke that made her mother laugh when there wasn’t much else to laugh about— and her delight in entertaining people began to bloom.

Despite — or perhaps because of — her Catholic upbringing, Anne’s become an award-winning liar. She is five-time 1st-place winner at the Northwest Folklife Festival Liar’s Contest in Seattle, and took the grand prize in the NW Tall Tale Challenge in 2016.

To her delight, she was eventually able to quit her day job and become a full-time storyteller. In 2018 Anne was invited to perform as a New Voice at the 2018 National Storytelling Festival, sparking a flurry of invitations to perform in Festivals across the country in 2019. www.annerutherford.com

Sneak Peak Videos:
Dark Shadows Made Me: A Halloween Story Told by Anne Rutherford
How Anne Became a Storyteller 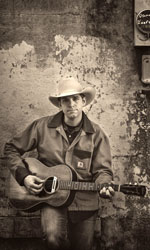 Andy Hedges is a songster, reciter, storyteller, guitarist, and collector of cowboy songs and poems. The son of an Italian schoolteacher and a rodeo cowboy turned preacher, Andy was born in Lubbock, Texas, in the spring of 1980. He grew up in the small community of Tokio, Texas, where his family paid rent on an old farmhouse by looking after a few head of cattle. It was there that Andy fell in love with traditional music by listening to his father’s cassettes of cowboy songs.Andy’s vast and varied repertoire includes classic cowboy poetry recitations, obscure cowboy songs, dust bowl ballads, and blues. He also hosts a podcast, Cowboy Crossroads which features in-depth interviews with fellow musicians and poets. Andy has performed many times with folk legend Ramblin’ Jack Elliott and the duo’s performance at the 60thNewport Folk Festival was named one of the “10 Best Things We Saw” by Rolling Stone. https://andyhedges.com/

“…Andy is at the epicenter of the collective beating heart of cowboy poetry and music. As an artist, and as a man, he is among the finest this renaissance has to offer.” –Randy Rieman

Decee Cornish is an award winning storyteller. He has informed, enlightened, and entertained audiences of all ages. His work with at-risk youth has been recognized by the Presidential Commission of Arts and Humanities. He is a five-time Texas State Liar’s contest winner, Story Slam National Champion, Fort Worth Live Theater Award Winner, Amon Carter Museum Outstanding Performer for presentations as the Negro Seminole Indian Scout “Gator Bill”, and received the Metropolitan Live Theater Award for his original one man stage show “To Love the Earth: the Life and Times of George Washington Carver.” He is known by many names including Jubilee’s Child, the Urban Griot, the Asphalt Aesop and most importantly Arianna’s Grandpa. http://www.deceecornish.com/index.html
Sneak Peak Video: https://www.youtube.com/watch?v=pHElzsGz1ig

Storytelling was a way of life for Eldrena growing up in New Mexico and Arizona among her Pueblo tribes of the Laguna, Tewa & Hopi. Her normal activities with family and friends were of sharing pueblo stories, songs, and family history including the humorous and serious personal stories that life brought. Reflecting back, she realized that listening to story allowed her to strengthen and stimulate the use of her imagination and creativity. The traditional songs gave her an appreciation of all music and songwriting. As a professional storyteller and educator, Eldrena offers captivating stories, a variety of recorded music and historical accounts from American Indians tribes across the country. https://www.eldrenadouma.com
Sneak Peak Video: https://www.youtube.com/watch?v=zjqUIuJkrjI

Humorist and folklorist Donna Ingham takes the ancient art of storytelling and gives it a Texas twist to entertain audiences of all ages. She passes on tall tales, folklore, historical and personal stories as only a Texan could — or would. During the pandemic, she Zoomed her storytelling as far away as Northern Ireland but will be glad to be back in person in Denton, Texas, for the Texas Storytelling Festival. A recipient of the John Henry Faulk Award and a National Storytelling Network ORACLE Regional Excellence Award, she also has the dubious distinction of having been named the Biggest Liar in Texas four times. She is listed on the Touring Roster for the Texas Commission on the Arts and on the Mid-America Arts Alliance Regional Touring Program. A former college professor, she is also a published author and producer of spoken word CDs. https://www.donnaingham.com/
Sneak Peak Video: https://www.donnaingham.com/videos.html

Carolina is a Colombian Bilingual Storyteller Performer, Podcaster and Author, who graduated in 2013 with a Masters in Storytelling from East Tennessee State University. Her vast repertoire of bilingual stories explores the myths, legends, folktales, historical and literary tales of Latin America. In early 2019, Carolina’s bilingual literary podcast “Tres Cuentos Podcast” dedicated to the literary, historical and traditional narratives of Latin America, was awarded a grant by Alternate Roots and another grant by The National Association of Latino Arts and Cultures. Carolina published her first book on Aztec myths, “The Hungry Goddess and The Five Suns.” A month later, she was a featured teller at the National Storytelling Festival in Jonesborough, Tennessee. www.carolinastoryteller.com, Bilingual Podcast: www.trescuentos.com
Sneak Peak Video: https://www.youtube.com/watch?v=3HJunRMpkC0

Toni Simmons is an award-winning, dynamic storyteller and author who brings new life to her stories with songs, rhythms, chants and audience participation. Toni is a former librarian and drama teacher who has presented her multicultural tales throughout the United States. She has captivated audiences at many festivals including the National Storytelling Festival Exchange Place, the National Black Storytelling Festival, and the Texas Storytelling Festival. Internationally, she has performed in schools in South Africa, in Germany, and in Mexico. Toni is listed on the Texas Commission on the Arts Touring Artist roster and was designated as an American Masterpiece by the National Endowment for the Arts. Her interactive sessions also use creative drama with a variety of age-appropriate folklore. Her programs are designed to motivate, inspire, and educate while being entertaining. She performs at schools, libraries, churches, festivals, and museums. https://www.tonisimmons.com/
Sneak Peak Video: https://www.tonisimmons.com/videos.html

An Oklahoma Choctaw and native of the Texas Gulf Coast, Tim shares stories of his tribal culture, Texas ghost stories, and tales of an action-filled, adventurous life. Author of twenty-plus books for all ages, he has a broad repertory for all ages. His first children’s book, “Crossing Bok Chitto,” garnered over twenty state and national awards, and was an Editor’s Choice in the New York Times Book Review. In June of 2011, Tingle spoke at the Library of Congress and presented his first performance at the Kennedy Center, in Washington, D.C. He received his Masters Degree in English Literature at the University of Oklahoma, with a focus on American Indian studies. Tim’s first book “Walking the Choctaw Road” was selected as Book of the Year in both Oklahoma and Alaska. His novel “House of Purple Cedar” won the American Indian Youth Literature Award. www.timtingle.com
Sneak Peak Video: https://www.youtube.com/watch?v=Az3rPrTFCGA