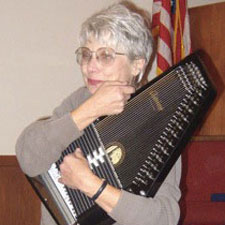 Storyspinning, the name Loralee Cooley has used for over 25 years for her storytelling work, comes from STORYtelling and yarnSPINNING.  And that’s what she does:  she spins yarns of all sorts:  folk tales from Scotland, legends and original stories from the Georgian Republic, tall tales from all over the U.S., family memories, poetry, folk songs and old songs and carols and gospel songs (using piano and autoharp).  Each program can be uniquely designed for the event, whether a holiday, a season, a period of history, a country or a particular theme.

A new project “tapped her on the shoulder” back in 2009, after she had related stories about presidential inauguration days to several groups on January 20, the day Barack Obama became president.  With so many students who listened to those stories having questions, misunderstandings, and downright inaccuracies about the new president, she felt that “shoulder-tapping” to tell the story of Barack (aka Barry) Obama’s childhood.  The results ended up being a small book entitled ISLAND CHILD.  It recounts Barry’s growing-up years on the two island chains of Hawai’i and Indonesia.  Published in 2011, it’s now available on order from Amazon.  (Input “Loralee Cooley” and “Island Child” and the book should come up.)
Loralee Cooley is now based in Albuquerque New Mexico…the Land of Enchantment…and has been on hiatus with her storytelling due to mobility and voice issues.  But she still enjoys a good story, and is always on the alert for a new tale that may “tap her on the shoulder.”
To contact her, here is how to do it:
LORALEE COOLEY
STORYSPINNING
4016 Palacio Real Avenue, NW
Albuquerque NM  87120
Cell phone: 806-282-9529
E-Mail:  storyspinning@sbcglobal.net
Web:  http://www.storyspinning.net
↑