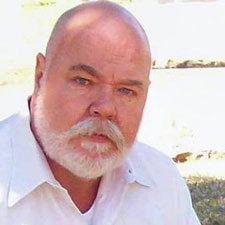 Born and raised in Woodville, Southeast Texas, RICK DAVIS escaped to Austin after high school, earned degrees, worked for the state, and now welcomes storytelling as a friendly alternative to “truth.” Admiring recordings and writings of Doc Moore, Rick performs many of Doc’s favorites, from chilling ghost stories to humor-filled Jack Tales. Rick is a member of the Central Texas Storytelling Guild. He has most recently performed one his own tales on the RISING STAR STAGE of the 2020 TEXAS STORYTELLING FESTIVAL in Denton. Rick was the Featured Teller at the Heritage Gardens’ 2019 Ghost Story Concert (Woodville), and a frequent Teller for Storytelling Saturday at the Cepeda Branch of the Austin Public Library.