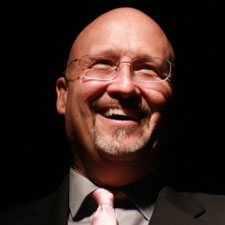 Paul Normandin is a large man with a big mouth who loves to tell stories to anyone who can’t outrun him. Paul learned to tell stories from the loving feedback of other people’s children while teaching Sunday School at University United Methodist Church in Austin for 13 years. (They would want me to say that they were teenagers and not children.)

Paul is an accomplished StorySlam champion. Winner of the 2017 Tejas Festival StorySlam. He is the Dean of the Merlin Works Institute for Improvisation where he is a teacher of Storytelling and Improv and is a producer of their shows. He has also produced many other shows in Austin to include the ongoing storytelling salon, Drinking with the Saints.

Paul has performed on the RISK! Live show, Cafe Improv in Princeton, New Jersey, and many Moth StorySlam competitions around the country. Paul is also the 2016 Houston Moth GrandSlam Champion.

In his spare time, Paul is an avid Ultimate Frisbee player, an Improvisational Actor, performing with his two best friends in their traveling Improv troupe, In Our Prime, and biking and swimming whenever he gets the chance. Paul is a father, husband, former US Army Infantry soldier, founder of Austin Free Hug Day, and co-founder and former president of the non-profit Austin Ultimate. When not traveling with his family, performing on stage, or throwing a disc, Paul is teaching, reading, and writing.