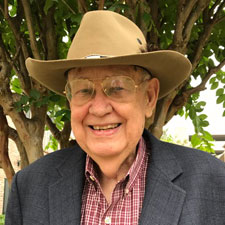 Bob tells personal stories and events of growing up in rural Texas in the 1930’s and 40’s. He worked as a farm hand, cowboy, and oilfield “roughneck” as soon as he was old enough to carry his share of the load. Going to college was his way of escape from riding old bronc horses and muddy drilling rig floors.  He can remember and relate events from as early as when he was three years old. He was in his 40’s before giving in to wearing boots and jeans again!

Bob has served as a master of ceremonies on many occasions at a variety of events, such as the Rotary Lombardi Awards dinner, and the State of the State Rotary Club of Houston event with Governor Ann Richards as speaker.  He always keeps his audience entertained and informed.  His good humor and quick wit are not to be denied.