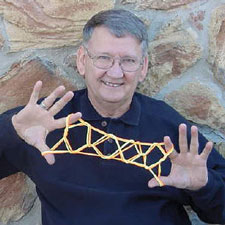 David Titus, author and professional storyteller, has been entertaining children and adults in libraries, schools, churches and at conferences and festivals since 1968. He travels extensively, consulting, conducting workshops and residencies, instructing adults in storytelling, and collecting stories and string figures. He has entertained audiences across six continents from the frozen Arctic to the Sahara. With a piece of string and a thread of a story he captures his audience, young and old. Needless to say, he is having a lot of fun doing it.

Collecting string tricks from Tibetan refugees in Nepal, Pakistani refugees in Cairo, or a traveler in the Seoul airport; he then shares them in other parts of the world. This Master Storyteller spent five weeks in Nepal in 1999 renewing acquaintances he made in 1997. He traveled to very remote regions to help at leprosy hospitals, teaching the patients to make string figures as physical therapy. He went to Nepal again in 2006.

Spending August and September 2000 in Mongolia, Titus took 20,000 strings to give the new organization “String Ministries” the acid test. The nomadic Mongolian people loved the diversion and activity these games provided. Eagle TV, the local Christian station had him on two live programs, translated all three of his videos for airing, and shot almost two hours of short testimonies and stories to be inserted in future broadcasting. He returned to Mongolia in August 2005.

Since 2001, Titus has gone to England to work in schools, prisons and churches and took two trips to Mexico to share his talents with string and collect information on the use of string figures in their culture. He has made three trips to Eastern Europe spending up to six weeks in Latvia, Lithuania Estonia, Poland and Finland working in churches, schools, prisons, a refugee camp and orphanages. In 2002, Titus took the first of two trips to South Africa and a mission trip to Belize. He went to South Africa and Namibia and made two trips to a Refugee camp for Liberian refugees in Ghana, West Africa. Venezuela was worked in there somewhere before relations with that country became so tense.

Taking his guide and translator from the States he made a trip to Papua New Guinea in October 2006. He stayed in the mountains with the tribal chief and his 5 wives. A wife cost 30 pigs there, so the chief was a rich man. He went to Australia on that trip also. He also returned to Poland in 2007. He spent a month living with a Palestinian family in the West Bank in 2008 and then went to Bolivia before that country was closed to travel. He seems to be just ahead of trouble. November and December 2008 will see him in Pakistan living with a family there and visiting surrounding villages with 3,000 strings.

In between his overseas travel, Dave works with schools in the United States spending a full day or two at a school turning kids on to the world of string. What great brain gym activities these are.

The video “String Magic From Around The World” has been a favorite with many schools, libraries and families since it came out in 1997. “This video shows more than 50 string figures, gives directions for over 20, and includes a practice string. It provides live-action demonstrations and storytelling with string figures,” School Library Journal, October 1997.

Titus’ first in the series of Christian string videos is “String Fun with the Parables.” Video Librarian gave it 3 stars out of 4 in the July/August review and School Library Journal said in June 1999, “This engaging introduction to the Old and New Testament Parables will appeal to Christian schools and churches and to public libraries where its cross generation appeal will be a plus.”

Titus has a video that explains the mission and goals of String Ministries, Inc. This 31-minute video titled “Sharing with String through String Ministries,” gives practical examples of how string figures can be used as a tool for mission trips, youth groups, retreats etc. Directions for each of the figures are included in the video. His forth video, “Exciting Christian String Figure,” was released in 2009. It is also designed to be used with children and youth groups, youth working with summer camps and VBS, and individuals going on mission trips. All of Dave’s video works are being produced in DVD format to bring them into the new century.

These DVD’s and books, plus audiotapes, strings and other string related products are available for purchase at www.StringFigureStore.com. Titus estimates that Goodwill Industries, Inc., who has the contract to provide the labor to produce the colorful knotless strings that he provides, will produce over 100,000 this year.

Titus has been a librarian in Ohio, Michigan, Honduras-Central America and Oklahoma and was also with the Oklahoma State Department of Education as a consultant to library and media programs. He has been active in storytelling and was president of Territory Tellers, the Statewide Storytelling guild.