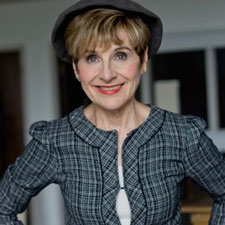 Pippa White has told at Timpanogos Storytelling Conference and at the Kansas Storytelling Festival. She presents historical figures so intimately they are like family. Among her many presentations are “The Story of the Orphan Train”, “Voices from Ellis Island” and “Far As the Eye Can See”. The latter is about the people of the prairie-those who crossed it (the pioneers), those who settled it, (the homesteaders), those who lost it (the Native Americans) and those who endured it (the brave people of the Dust Bowl.) Pippa White turned to solo performing in 1994. Previously, she had an extensive career in theatre and television on the West Coast, including five years hosting a daily morning television show at ABC. Pippa calls her “One’s Company Productions” part theatre, part storytelling, part history. Audiences call them “unique, captivating and touching.”