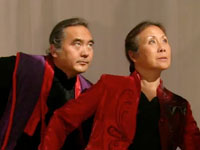 Eth-Noh-Tec is made up of the husband-and-wife duo of Nancy Wang and Robert Kikuchi-Yngojo, who formed Eth-Noh-Tec in 1982 and have contributed greatly to the Asian American performing arts movement. They have achieved the goals of their name: the weaving [tec] together of distinctive cultural elements of the East and West [eth] to create new possibilities [noh]. They are no strangers to our Festival, and we are eager to welcome them back.

Nancy and Robert are deeply committed to passing on the skills which they have learned. Their apprenticeship program and mentoring work is outstanding. They have led trips to China and Korea that have had a profound impact on the American storytelling community.  http://www.ethnohtec.org/ 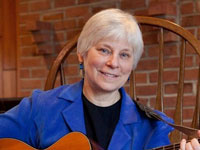 Heather uses a minstrel style of storytelling, blending original music, folk guitar, poetry, prose and the sung and spoken word to captivate her listeners. She has toured her repertoire of world folktales for the past thirty years to theaters, festivals and conferences throughout the United States and abroad. She is a recipient of the Circle of Excellence Award from the National Storytelling Network.

She has recorded eight albums of stories which have garnered prestigious awards, such as the National Library Association Notable Recording Award, Parents Choice Gold Classic Awards and Storytelling World Honor Recording Awards. She has authored seven children’s picture books based on folktales. The Baker’s Dozen: A Colonial American Tale was selected to be part of a traveling book exhibit sent to Russia in celebration of the Year of the Young Reader. The Little Red Hen was chosen as a New York Public Library’s 100 Best Children’s Books for Reading and Sharing.

Heather holds a Ph.D. in Leadership and Change from Antioch University. She is the founder and Executive Director of Story Arts, a cultural arts organization in Huntington, New York, that presents storytelling concerts and workshops in schools, theaters and community centers in the Long Island, New York, area. http://www.heatherforest.com/ 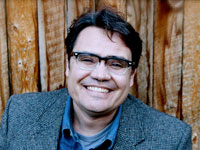 Sam comes to us from Utah. He is a storyteller and singer/songwriter of exceptional talent. For the last twenty years he has been bringing his unique variety of storytelling and music to festivals, universities and museums throughout the country, including the Kennedy Center for the Performing Arts, the National Storytelling Festival and the Timpanogos Storytelling Festival. Sought after internationally, he has performed in such far-flung places as Canada, Bulgaria and Japan. He has created books and stage pieces including Sanctuary: The Story of Zion for the centennial of the National Park Service and One of a Million Stars, commemorating the 14-year mission of the Mars rover, Opportunity.

In addition to his work as a storyteller and singer, Sam produces and hosts the radio show The Apple Seed: Tellers and Stories which airs daily at 1:00 CST on BYU Radio and on Satellite Radio (Sirius XM 143). The show’s archive features hundreds of stories for your listening pleasure. https://www.sampayne.com/ 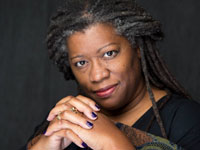 Donna is an internationally known multiple award-winning storyteller and author. A highly animated performer, she has been entertaining, educating and inspiring audiences for more than thirty years. She has been called “a Walking Disney Movie”.

Donna was an “Army brat” and grew up all over the world. This experience gave her a deep wisdom of the world and its people. Her recordings have won Parents Choice Awards and Storytelling World Honor Awards. She has produced an anthology titled A Pride of African Stories and authored The Story of Kwanzaa, A Big Spooky House, and Li’l Rabbit’s Kwanzaa. Her workshops that focus on literacy are praiseworthy. She has presented at the National Storytelling Conference and the International Reading Association Conference and others too numerous to name.

She is a founder of Artists Standing Strong Together, an organization which has provided many valuable opportunities to storytellers during the current pandemic. https://dlwstoryteller.com/