Emcee: David Claunch does more than just clown around. He is a retired construction project engineer. He did not retire due to age, he retired because he found his true calling. Storyteller, speaker, clown, and balloon artist.

Kim Lehman specializes in entertaining, educational programs for children and adults that combine stories (both personal narrative and folktales) with music, props, and puppets. Currently on the Texas Commission on the Arts Touring Roster, Kim has performed at hundreds of festivals, schools, libraries, and museums including being a featured teller at the Texas Storytelling Festival. Kim is in demand throughout Texas as an effective workshop presenter with practical, inexpensive program ideas for librarians, teachers and parents. www.KimLehman.com

Donna Ingham is a creator of both tall and true tales, Donna Ingham is a storyteller and author preserving the history and lore of the Lone Star State. She is a recipient of the John Henry Faulk Award from the Tejas Storytelling Association and an Oracle Award from the National Storytelling Network and is listed as a Touring Artist on the Texas Commission on the Arts roster. DonnaIngham.com

David Thompson David had been telling for 45+ years. His telling encompasses the truly ancient epics, historical events, international folklore, social justice, and original stories based on archetypal themes and characters. David has been lauded highly and is repeatedly invited to tell in European Zoom events, which include multi-national participants and audiences. As for a motto? “Children have storytellers; adults need them.”

Emcee: Rick Davis, escaped Woodville in Southeast Texas, and arrived in Austin where he earned degrees, worked for the state, and now welcomes storytelling as a friendly alternative to “truth.” Admiring recordings and writings of Doc Moore, Rick performs many of Doc’s favorites, from chilling ghost stories to humor-filled Jack Tales. riverwoodtx3@gmail.com 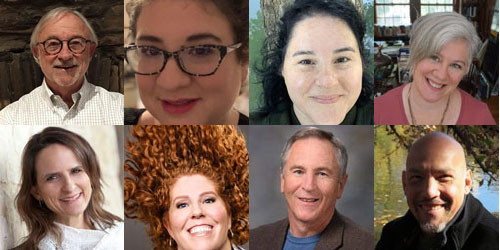 Kanute Rarey is a storyteller from Western North Carolina. He told his first “official” story in 2015 at John C. Campbell Folk School in Brasstown, North Carolina. He has told stories for festivals and friends from Florida to Texas to Minnesota to Virginia and parts in between. Born on a family farm in Ohio, Kanute began visiting the Southern Appalachian Blue Ridge mountains regularly about forty years ago and fell in love with the people, their stories, the wild rivers, the beautiful lakes, and blue mountains ridges. He moved to western North. Carolina in 1990. Work took him away for awhile but good fortune brought him back to Hayesville full-time eight years ago and he set about telling stories. Kanute’s stories are often original, from growing up on a farm, family gatherings, life experiences and “characters” that he has known along the way. Stories often “peppered” by his curiosity and imagination.

Susan Pickover juggles being a textile designer in the fashion industry and a mom to a rambunctious 4-year-old. She trained in long-form improv, musical improv, and storytelling in New York City at the Upright Citizen’s Brigade and The Magnet Theater. For the past 7 years, she has had the joy of teaching and performing improv here in Austin, TX. You can take one of her classes at Merlin Works.

Gloria Rabil is a writer, filmmaker, and improviser in Austin, Texas. Her creative work bears the stamp of her unique storytelling style, focusing on the relationships because all the story you need is in the relationship. Gloria hopes to be an inspiration to others who feel that life is hard but don’t want to give up on their dream.

Susan Mack is a writer, poet and mother to two teenagers and a dog. She is currently working on a public health research project and trying to make sure her children actually get on Zoom for their classes each day. She has told stories at multiple Austin venues, holds the title of 2019 Bulb Story Slam Grand Champion. and will be starting an MFA at the Vermont College of Fine Arts in January.

Shayne Larango is the StorySource for Ten-gallon Texas Tales and the “Biggest Liar in Texas” awarded by the George West Storyfest. She tells stories around Tejas, the USA, and as far away as Istanbul. A Sugar-Coated Hellcat who dearly loves to laugh, she believes even serious stories deserve a celebratory atmosphere. See more of what Shayne is up to at www.shaynelarango.com.

Warren Holleman spent most of his adult life putting exhausted medical students to sleep with his boring lectures. Warren Holleman retired early to pursue his dream of becoming a bona fide storyteller. Over the last five years, his stories have been featured on the Moth Radio Hour, the Moth Mainstage, TEDx, the National Storytelling Summit, and the Texas Storytelling Festival. Warren enjoys telling personal stories as well as family stories from his rural roots in North Carolina and Texas. And, he uses these stories to animate his lectures and workshops on storytelling, work-life balance, and spiritual dimensions of work and life. Warren is a former Professor of Behavioral Science at the University of Texas MD Anderson Cancer Center.

Ladislao “Ladi” Loera is an artist, improviser, award winning storyteller, and animal lover. He has taken part in story telling events for Testify, I’m from Driftwood, Drinking with the Saints, and the Moth, where he won with a story about sympathetic nausea and what it teaches us about love and connection. Ladi is also an award winning public speaker with Toastmasters International. He is a native Texan who currently resides in Austin with his partner, and two elderly cats who hate each other.

Emcee: Paul Normadin is a large man with a big mouth who loves to tell stories to anyone who can’t outrun him. Paul learned to tell stories from the loving feedback of other people’s children while teaching Sunday school for 13 years. A producer and performer at Testify in Austin and teller at RISK! Live in Austin and Café Improv in Princeton, New Jersey, Paul is the 2016 Houston Moth GrandSlam Champion and a Tejas StorySlam Champion. In other words, Paul’s head is growing as big as his mouth! pagen8@gmail.com

Emcee: Tom McDermott is a highly sought after first generation Irish-American storyteller, author, singer, musician, comedian, percussionist and speaker who wanders about the country sharing stories, songs, laughter, inspiration, noise and mayhem over 50,000 kids and adults each year (since 1991).

Tim Tingle is an Oklahoma Choctaw and native of the Texas Gulf Coast, Tim shares stories of his tribal culture, Texas ghost stories, and tales of an action-filled, adventurous life. Author of twenty-plus books for all ages, he has a broad repertory for all ages. www.timtingle.com

Mike Tomson grew up in the remote Northern Pacific islands of Micronesia, south of Hawaii and east of the Philippines. Raised in an oral island tradition, he remembers stories not written but rather carved in the wooden rafters and read in the firelight of meeting houses. Indigenous elders have guided his choices as he has traveled through the Western USA, Australia, Central America and many Pacific nations. Mike currently lives in Grass Valley, CA and is affiliated with storytelling and cultural preservation groups.

Alicia Mary Retes, Mayo Yaqui descendant, is a captivating storyteller who fully embraces the character, spirit, movement and sounds of the Animal People in her interactive Indigenous Tales of Tricksters and Shape Shifters. By retelling a variety of Indigenous stories, she creates original compositions sung in the corresponding Indigenous language with English and Spanish translations to celebrate and honor traditions and preserve idioms and language. She is presently exploring creative projects reflecting the cultural arts of Sonora and Sinaloa, Mexico with “Two Bears” her adaptation of an original Yoemem (Yaqui) legend recorded by Ruth Warner Giddings to be featured at the Silicon Valley Shakespeare’s 2021 Season – Folktales from Around the World.

Lorene McHutcheon Stilwell was raised in a matriarchal lineage of Scots Seanachaen (traditional storytellers) on the West Coast of Scotland surrounded by stories. Lorene has deepened her sense of story through the lifelong study of mythology, literature, music and poetry of the Celtic peoples. lorsti123@yahoo.com

Carole Forman is a Jewish Spiritual Storyteller and actor who has told stories all over the U.S. and Canada to adults and children of all backgrounds, in both her own programs, and with her late husband the Maggid and author Yitzhak Buxbaum. Carole appeared in a number of Broadway productions. Each week, Carole acts in plays-in-progress with the 29th Street Writer’s Collective and Brave Space via zoom. Carole lives in Brooklyn, NY. Please stay in touch, carolefor@msn.com. AEA and SAG/Aftra, www.caroleforman.com

Hazzan Steve Klaper is a Jewish troubadour – a spiritual storyteller, minstrel and teacher. An ordained Cantor, Maggid and teacher of Torah, Steve draws upon his Orthodox Jewish roots and over 40 years experience as a professional musician, infusing traditional Jewish teachings with mystical chant and melodies, sacred tales and wisdom from a variety of traditions. As co-founder of Song and Spirit, Steve promotes deep ecumenism, as an exploration into the ways in which every faith tradition seeks to touch the Mystery.

Emcee: Rebba Raine Teller: At the end of her 50 year successful public school teaching/administration career, Rebba Raine was ordained as a Maggid (ordained spiritual storyteller) by Yitzhak Buxbaum of blessed memory of The Maggid Training Program (Brooklyn, NY). She was already an ordained interfaith minister and post-denominational rabbi. She has served as both president of TSA and her local guild, Central Storyteller’s Guild. She often uses story from her pulpit as Rabbi of Temple Israel in Schulenberg, Tx as well as her cyber-synagogue, HaShem’s House International (hashrmshoues.org)